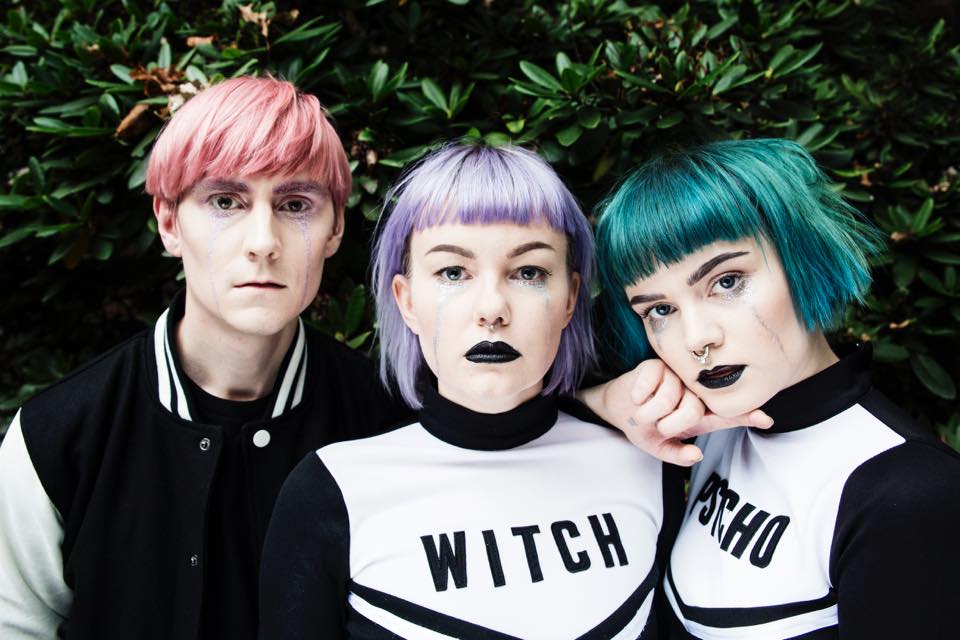 The Magnettes – A Biography

‘Say what you want to say. Do it as loud as you want. Be weird, be ugly, be too much, fuck as much as you want and question everything’.
The Magnettes’ Manifesto

Pop music is one of Sweden’s major cultural exports and over the years it has given us a wide diversity of talented artists such as Robyn, ABBA, The Knife Lykke Li, Icona Pop, The Cardigans, Swedish House Mafia and Zara Larsson. Ten hours from the hit-making hub of Stockholm, above the Arctic Circle where the sun doesn’t rise during winter, lies the sleepy town of Pajala, home to 2000 residents…and The Magnettes, a fearless 21st Century fuck-pop trio who think ugly and weird is cool and that the patriarchy needs to be crushed. Right now.

This remote region has a minority language called Meänkieli, a language that was forbidden in Sweden until 1957 and today only spoken around 50 000 people. The Magnettes celebrate their roots and incorporate Meänkieli and the area’s old folk music into their infectious and inimitable glitter punk pop. The band is Rebecka Digervall, Sanna Kalla and Tomas Backlund who’s mission is the right to be as you want to be.

The Magnettes’ founders and co-vocalists Rebecka and Sanna describe themselves as ‘non-normative’, ‘witches’, ‘Tornedalingar’ (which translates as natives of the Torne Valley, a Swedish minority) and ‘Sisters of the Ugly Youth’ and this subversion is evident in their spellbinding songs. “We’re reclaiming the word ‘ugly’” declares Sanna “Why does beautiful have to be the standard? We have no regrets. We’re saying exactly what we want to say”.

“There’s some sort of Northern rebellion” adds guitarist, keyboardist, and producer Tomas Backlund. “We don’t want to be your average singing self-obsessed diary entries. We aim to do something bigger but we want to do it without moving to Stockholm, London or LA and writing songs about beaches and being super fit because what’s interesting about that?”

The seeds of rebellion were planted when Rebecka and Sanna met at school aged six-years-old. By 14, Rebecka had written a plethora of songs for the duo. In 2012, they released their first official song “Paper Cut” and performed a series of shows across Europe and Russia. By 2014 Tomas joined and the duo became a trio.

In 2014 The Magnettes went to the States for the first time to perform at the New Music Seminar in New York. In the same year back in Sweden they were the main subjects of Hans-Erik Therus’s documentary ”Pajala State Of Mind”, which featured in the Gothenburg Film Festival, the Tempo Documentary Festival in Stockholm and on Swedish national television. The director was so fascinated by the band that he’s embarked on a fly on the wall sequel with the band, documenting where they’re at three years later.

In the spring of 2015 the group headed back to the States to perform a string of head turning shows at SXSW, followed by a trip to Nashville for a pivotal song writing session. “Something happened in Nashville,” says Rebecka.“we were just like, ‘Yeah it’s time to be fearless and write whatever the fuck we want.’ So we did!” Energised by the trip the band began recording in Tomas’s kitchen, carving out a middle ground between their main influences, including Talking Heads, Elvis Costello, Bikini Kill and Katy Perry.

The band’s shows at SXSW led to a booking at The Great Escape in Brighton the following month, followed by a series of summer shows and festivals across Europe. In the autumn they returned to the States for a US tour including New York, where they played CMJ and signed a record deal with Nashville based label DigSin.

Since then they’ve barely paused for breath. They’ve released four critically acclaimed singles (‘Bones’, ‘Killers in a Ghost Town’, ‘Hollywood’ and ‘Sad Girls Club’, which received support from Spotify and key bloggers including Perez Hilton), toured incessantly and written their debut album ‘Ugly Youth’, that was released on 30th June 2017. The song Young and Wild got A-rotation on Swedish national radio over the summer of 2017 and in the end became the 10th most played song on Swedish radio 2017. They also were nominated one of 20 emerging acts on the worlds biggest festival Summerfest in Milwaukee in the USA. Their lives was followed on Swedish Television in the TV program ”Min Squad”.

The Magnettes describe the themes of the album as being “mainly about adolescence and identity, coming to terms with who you are and finding your place in the world. It’s also about friends, fucking, fighting, and drinking. One pretty central theme for the album was the idea of an alternate universe where the tables were turned, the freaks had taken over, the goths were cheerleaders and cool kids, and were being weird was just normal.” And there you’d find plenty of Magnettes fans… who the band says ‘like things that are kind of leftfield yet straightforward and tend to get into a lot of heated arguments about, for instance, social issues and gender norms. They could be punks or indie-fans, but could just as well be into hip-hop or mainstream shiny pop. For us, it’s pretty much the same, because when it’s good it’s simple, like a splash of red on something black-and-white, or a punch to the face.”